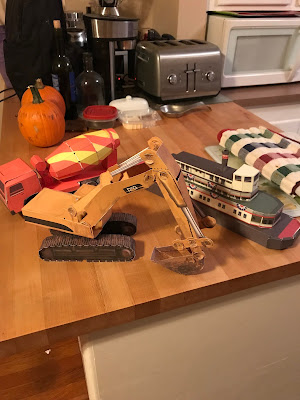 There was a GM plant not too far from my house when I was growing up. My family knew so many people that worked there, I think I just sort of assumed I would some day too. 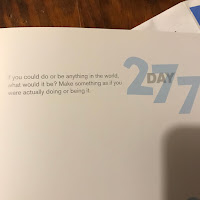 We spent all day yesterday running around the city, mostly spending gift cards. We hit a Barnes & Noble and there was an excellent 75% clearance table where we found a box set of Colossal Paper Machines. It was originally $14.95. I got it for about $3. There are 10 paper folding projects that all have moving pieces.

After a lazy breakfast, we decided to get the box set out and I let each of the younger three kids pick one they wanted to make. Silly me, I thought I would just have to guide them a bit. Turns out, these are really intricate and complicated. We got them out right around 10:30am. I finished the last one at 5:00pm. Yeah...they really weren't any help at all.

But once I figured out a few tricks and some creative use of tweezers, I was starting to enjoy it by the end. I don't think I'll ever attempt to work on more than one at a time, but I'll definitely go through the rest of the projects. There's a steam locomotive I'm looking forward to. Of these three, the excavator was the most fun. The cement truck was not.