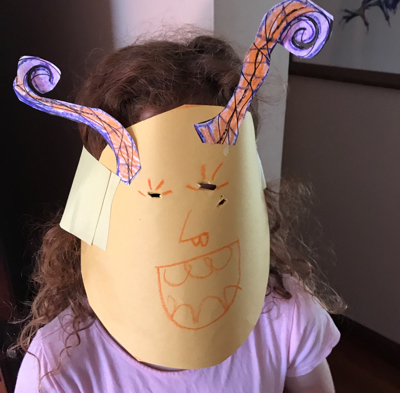 Stealing my daughter's creativity. But it sort of works with the prompt. 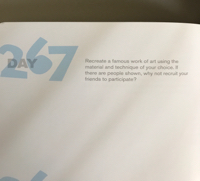 My younger daughter was having a tough day earlier. She was all over the place. Bugging her siblings, not following directions, acting out for attention.
She gets in these moods. There seems to be a switch of some sort. I never know what's going to start it. (If I did, I would so make sure it never started.) But she has learned an off switch.
Last year her school offered extracurricular clubs. For whatever reason she chose Yoga club. I was really surprised she picked that because I know calm and quiet isn't her strong suit. But she loved it.
A few weeks later she got really mad at her older brother. Next thing i see is her sitting the chair in a half lotus, hands together, breathing slowly. Ever since then it's been her go to when she gets mad.
She didn't need her off switch today, although I was right at the edge of asking her to try it. I try to cut off the outbursts before they even start. This time though, I could tell she just needed attention. I asked if she wanted to color with me. She readily agreed because she knows that means she gets a page out of one of my adult coloring books. She chose a page with lines and swirls that looked like feathers to me.
She colored the first area then immediately jumped up and said she needed scissors. 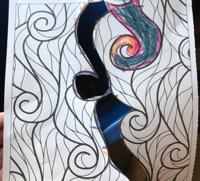 I wasn't sure what she was going for, but I kind of watched out of the corner of my eye. She colored another with the same colors and cut it out too. Then she ran back for two pieces of yellow construction paper.
A few minutes later she had her mask complete. Then she glued the antennae on and tried on the whole thing. She realized she didn't measure the eyes correctly when she couldn't see out of them. She decided she could just add the third eye. Then she turned and looked at me and said "Look mommy! I'm an alien!"
So, maybe we didn't recreate a masterpiece, but we did make a new masterpiece from another bit of art.
Some days I'm so jealous of her creativity.